This web page was produced as an assignment for an undergraduate course at Davidson College.

Treatment for malignant tumors can be ineffective, especially for a recurring brain disease like gliomas. In most cases, recurrent tumors after surgery acquire new mutations and progress to a worse stage. Additionally, chemotherapy used for treatment of cancer is mutagenic and could potentially play a role in the second malignancy development. Thus the goal of this study was to find the genomic differences between initial and recurrent tumors and to study how the chemotherapy drug temozolomide (TMZ) is affecting the recurrent cell mutation pathway.

I thought the paper was informative and very applicable given the ongoing research in cancer genomics and treatment. I found it helpful that the paper tried to provide definitions, such as shared and private mutations, and background information on standard of care and of TMZ. Figures 1 and 2 were relatively easy to read, although I would have liked the figure color hue to have more contrasting colors than gray, blue and navy blue. The language became a little vaguer as the researchers went on to describe their methods and results with the TMZ-associated mutations. A more detailed description for the signaling pathways and why they chose to focus on the effect of TMZ on these pathways would be helpful.

Figure1 depicts the genomic relatedness of initial tumor cells and their subsequent recurrent cells in patients.

Panel A shows the number of mutations that occur exclusively to the initial or recurrent tumor (private) or both (shared) in each patient. Shared mutations account for an average of 54% of all mutations. We can see from the graph that the private recurrent mutation number are much higher in five of the eight TMZ-treated patients (>1000) and the grade of recurrence is worse (Stage IV) than the other patients, indicating TMZ plays a role in new recurrent mutations. 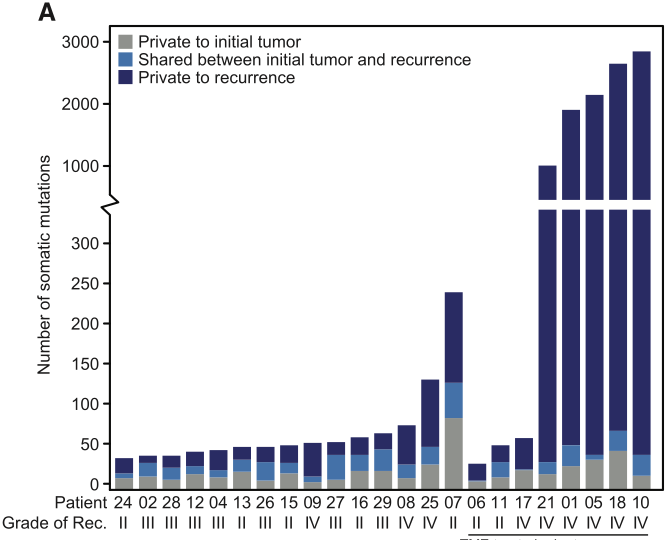 Panel B to D include chromosomal maps and dot plots of initial and recurrent tumors.

Panel B shows data taken from patient 27, one of the four patients who has a lot of shared mutations between the initial and recurrent tumor cells (>75%), indicating a linear clonal evolution where the recurrent cells develop from a later stage of the initial cells. 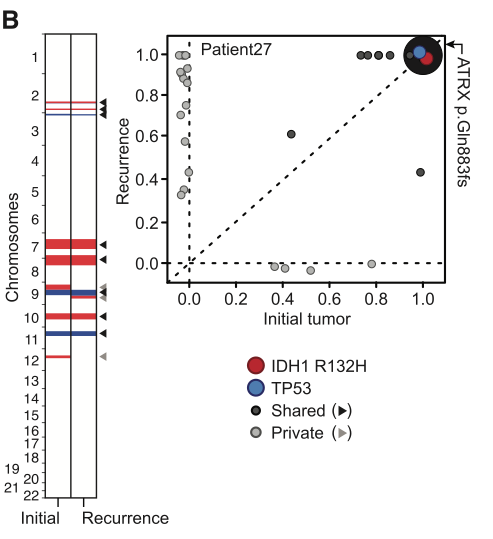 Panel C shows the opposite case (branched clonal evolution) from patient 17. There were significantly less shared cell mutations (<=25%) except for IDH1 which occurs in all patients. The recurrent tumor cells likely arise from an early stage initial cell and branched out as the recurrent cells acquire new mutations. 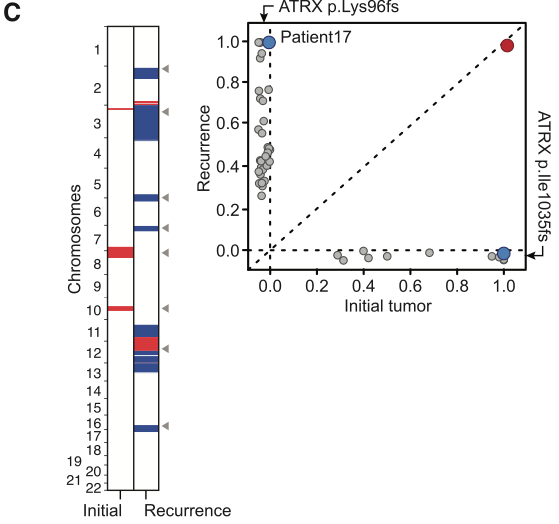 Panel D depicts the results from examining intratumoral heterogeneity in patient 18. The researchers examined  BRAF and found that BRAF remain specific to initial cells and not recurrent cells. This panel is to assure the reader that the previous findings on initial and recurrent mutations were not a misclassification. Note that patient 18 is one of the TMZ-treated patients who gained a higher number of private recurrent mutations, indicated by the number of dots on the recurrent side of the dot plot. 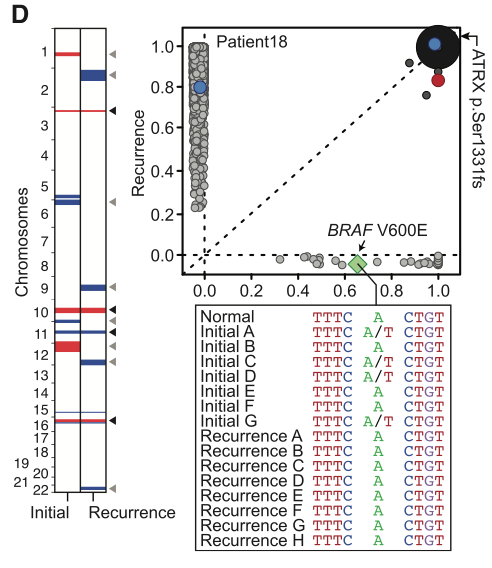 Figure2 compares the disease progression and phylogenies of two patients, one of whom is patient 17 from panel 1C. 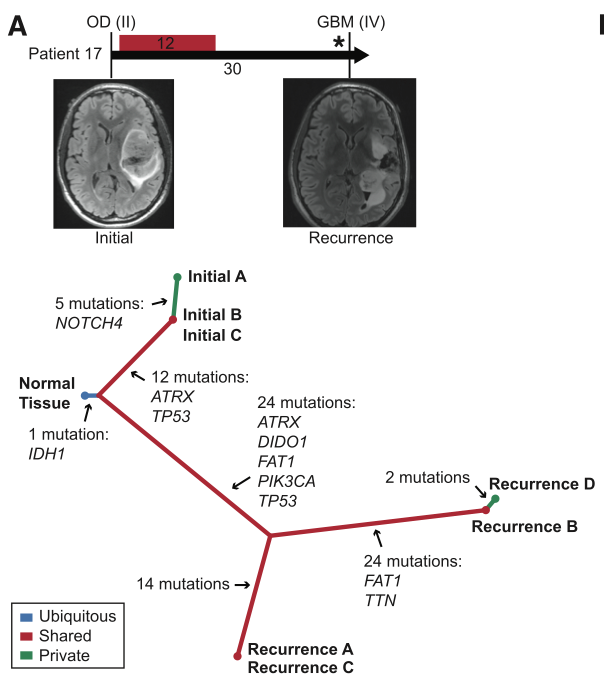 Panel B shows the results from patient 04 to indicate whether sequential recurrences are descended from an initial tumor of a certain stage. They traced back the evolutionary stages to hectic beginnings, with recurrence 2 and 3 branching from an initial common cell (with IDH1 and TP53 mutations found in all cells) at an earlier stage than recurrence 1. Recurrence 3 was a direct offshoot of recurrence 2 though, showing that there is no definite pattern to recurrences arising from mutations. 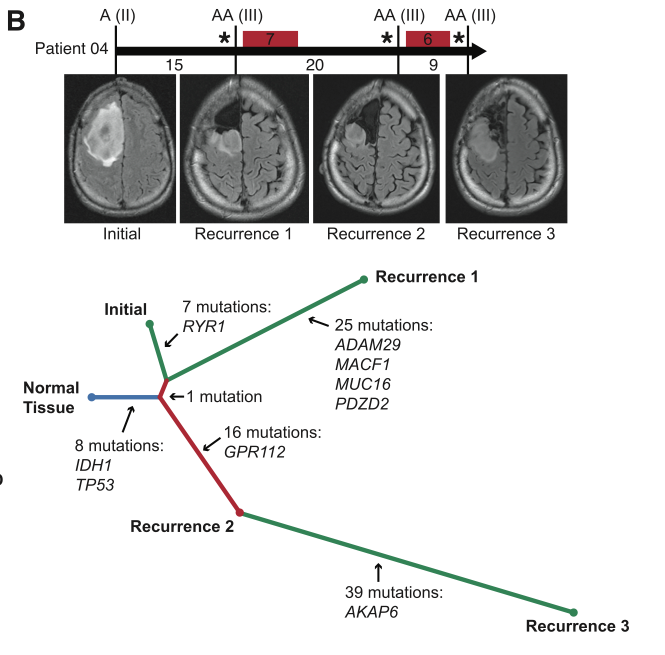 Figure 3 focuses exclusively on TMZ-treated patients to answer the question of whether TMZ plays a role in recurrence.

Panel A shows the number of TMZ-associated mutations which made up a significant portion of the hyper mutations of the recurrent higher stage gliomas in the patients. 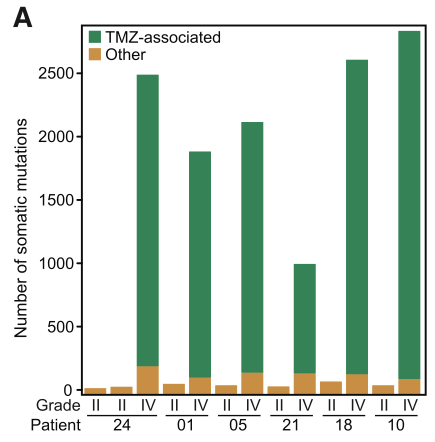 Panel B shows the high number of mutations in the two pathways involved in the development of gliomas. All the mutations are TMZ-associated (green color) and occur in the hypermutated Stage IV tumors of TMZ-treated patients. 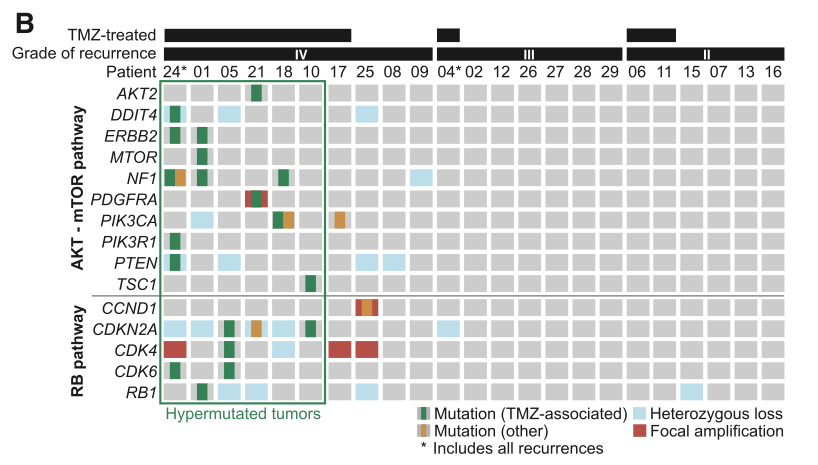 Panel C depicts the loss of RB1 expression in the RB pathway due to a splicing mutation, which may result in loss of growth suppression function and thus the development of a tumor. 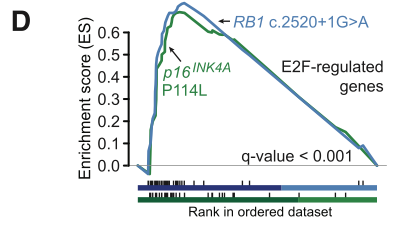 Panel E depicts immunohistochemical results from patient 01. A line separates the mTOR wild type and mutant regions. mTOR is part of the Akt-mTOR signaling, also involved in the development of tumors. The mutant region has more proliferative rates (more staining and darker colors in the mutant compared to the wild type) indicating TMZ induced mutations in the malignant progression. 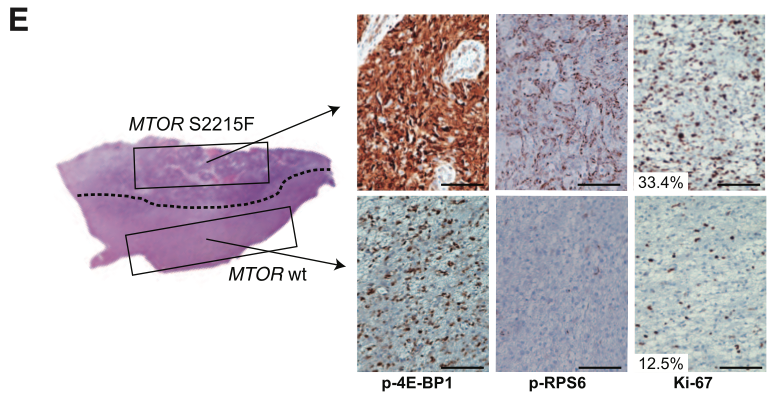